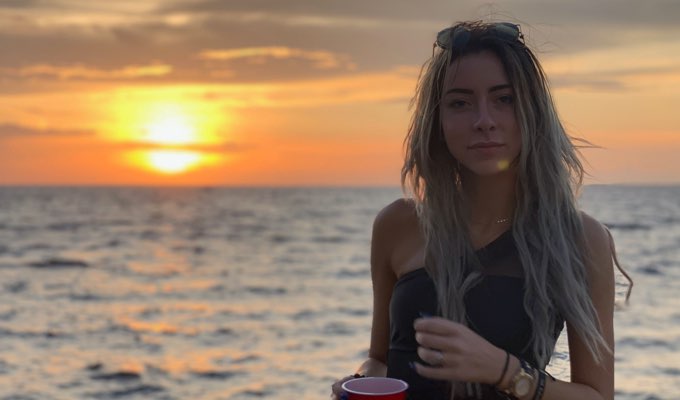 She’s just now starting as a DJ, but has already gotten gigs in Orlando, Florida and back in Brazil where she was born.

When I was 14, I went to my first electronic music festival and all I could think about the entire time was ‘I want to be the person up there that makes people feel like I’m feeling right now.’ Ever since then it’s been my priority in life. About a year ago, I started learning how to play and produce music, then I got my first gig.

That’s when she decided to get her artist name, DEKA, tattooed somewhere on her body.

Even if I change my DJ name at some point, DEKA will still mean a lot to me because it’s the beginning of everything: my career and when I started music.

Now she’s spinning professionally, and it makes her so happy.

It’s pure happiness. It just makes me want to jump and scream it’s so good. It’s amazing to see people having fun because of what you’re doing. They’re enjoying your work because of the effort you’re putting into something they love.

Once she decided a tattoo was in her future, she did her research. A lot of it.I found Hart & Huntington because it was listed as one of the best places in Orlando. I couldn’t find one bad review anywhere online, and everyone I talked to who went there said only great things.

So she made an appointment at the Hart & Huntington shop in Orlando and sat with H&H tattoo artist Stephanie James to get those four bold letters inked into her skin.

When I walked in for the first time, it wasn’t what I was expecting. It looks like a normal store, not a tattoo shop. I thought it was going to be crazy, but everyone was so professional and nice to me. Stephanie is such a sweetheart.

And that was important to DEKA, because she was second-guessing her decision.I was really, really scared because I hate pain. I’m especially sensitive to it. I hate getting a shot or blood drawn. I get sick and dizzy. So when I got to Hart & Huntington, I was like ‘Why am I even doing this? I don’t need to get a tattoo.’

But Stephanie reassured her, and she pushed through.

Once Stephanie started working on the design, the pain was there but way more bearable than I expected. She told me everything I needed to know before we got started: how it would feel, how to take care of the finished tattoo once I left the store. It was easy to ignore the pain because Stephanie would chat with me while she worked even though she was concentrating. She was really sweet. And then she was done!

DEKA was so happy with the finished product, she immediately wanted to get more. Pain wasn’t part of the picture anymore.

I had my second tattoo done with Hart & Huntington tattoo artist Mark Fernandez. He was so freaking nice. I originally thought I’d only get one tattoo, so when I decided to get a second one, I knew it had to be just as meaningful as the first. Thanks to Mark, I’m in love with that one too.

Her second tattoo means “Create your own reality.” Mark helped her with the placement of it, especially how it should be inked to work as part of a bigger piece if DEKA ever decides to add to her collection.

He’s so great. He made me feel comfortable to get in touch with him to talk about any future tattoo plans I have in mind before I go ahead with them. He truly has the mind of an artist.

The Joker’s smile and main line, “Why so serious?” on the back of my neck and I’m not sure where yet, but also a line from an electronic song I love, “Live a life you will remember.”

DEKA swears there will be way more to come after those two additions as well.Hart & Huntington will be the place I’ll always go to get more ink. It’s worth every penny. A tattoo is going to be something you have in your skin for the rest of your life, so you need to go to a place you know is good with people you can trust.

That’s H&H through and through.

My advice to anyone considering getting their first tattoo is to start with something small that you’d be able to sit through.

And remember that with a little pain, there’s a lot to gain.